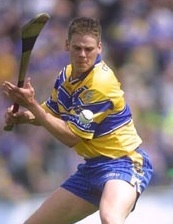 Published: over 3 years ago

Sixmilebridge man John Reddan, having won his first All Ireland medal in 1997 on a famous day for Clare hurling when he captained the Clare Minors to their first and only All Ireland title, following this he represented London winning a Nicky Rackard medal when they defeated Louth in 2011 before moving to Birmingham and playing for John Mitchels GAA club and Warwickshire who won the Lory Meagher cup yesterday after defeating Leitrim.

Reddan who turned 38 this year is no doubt trading secrets with great friend Niall Gilligan on career longevity - I'm sure some of these tips will be revealed at the up coming Clare Minor 20 year reunion later this month in Bunratty.