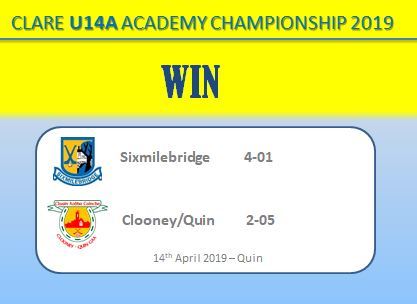 Reminder to any person young or old interested in writing match reports for our media outlets please get in touch with administrator@sixmilebridgegaa.com

We will provide some tips as well as a template for your report - It is a great learning experience and will help you with your written English skills for future exams. :-)

Sixmilebridge U14 Academy team played Clooney Quin last Sunday on a bitter cold windy day. The Bridge started out the stronger of the 2 teams with goal poacher supreme Niall Moloney converting a goalmouth scramble to put us a goal ahead in the 2nd minute. Unfortunately for the men in yellow and blue Clooney Quin scored 2-5 without reply for the rest of the 1st half as the strong wind was blowing in their favour. They were also showing great determination in the many rucks. So the score at Half time was 2-5 to 1-0 in Clooney’s favour.

The scoring for the 2nd half took a while to kick off with great defensive prowess shown by both teams. The drought was ended when a strong Evan Neenan shot on goal was deflected over the bar by the CQ keeper. 10 minutes after that point Finn Murphy launched in a long range free that took the goalkeeper by surprise and the sliotar just dipped under the bar for Sixmilebridge’s 2nd goal. Now on a roll, Finn picked up a loose clearance at the 21m line and with a rocket of a shot with his preferred left side to beat the goalie once again a couple of minutes after his first.

Sixmilebridge were put under massive pressure from the Clooney forwards but with heroic efforts from Jack Lee, Calum Toomey and JJ O’Reilly the lads in green and red were kept scoreless. With only a few minutes to go Reece Kirkland, who had been moved up from corner back to full forward showed great skill to set up a chance for Niall Liddane and he pulled low and hard into the corner to put Sixmilebridge ahead for the first time since early in the game. The boys were able to hold out to keep out the last-ditch attempts from the Clooney forwards, to all the supporters great relief. Great heart was shown to overcome the 8 point deficit that was in place at half time.