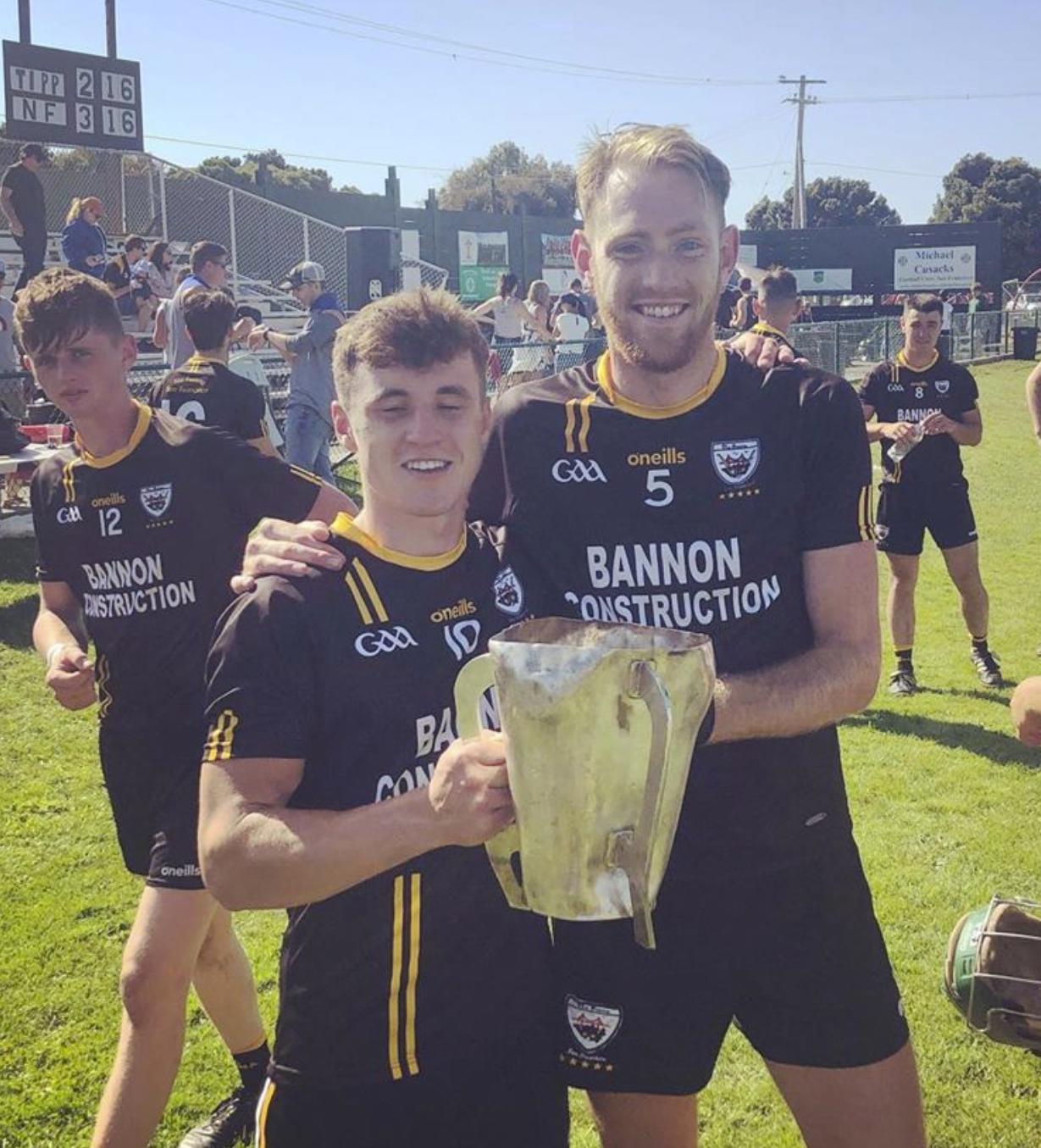 Congrats to Paidi Fitzpatrick who recently won a Senior Championship medal in San Francisco with Na Fianna after they defeated Tipperary 3-16 to 2-16 in Treasure Island last weekend. Paidi lined out at wing back and was joined by fellow Clare man Rory Hayes (Wolfe Tones) in causing an upset against favourites Tipperary.

Fitz who recently captained the Bridge to a Senior title has been travelling for a number of months dusted off his Macbook, hurley and helmet leaving the rainy valley of Fortwilliam for the sunshine of Silicon Valley earlier this summer as he continues to plot the next big .com

Thankfully for the Bridge supporters he is back on Garneyside now and was spotted driving in to training last week with a surfboard on the roof and ran out onto the field in his signature boardshorts and hollister t-shirt. We look forward to seeing him back in the Bridge colors very soon. 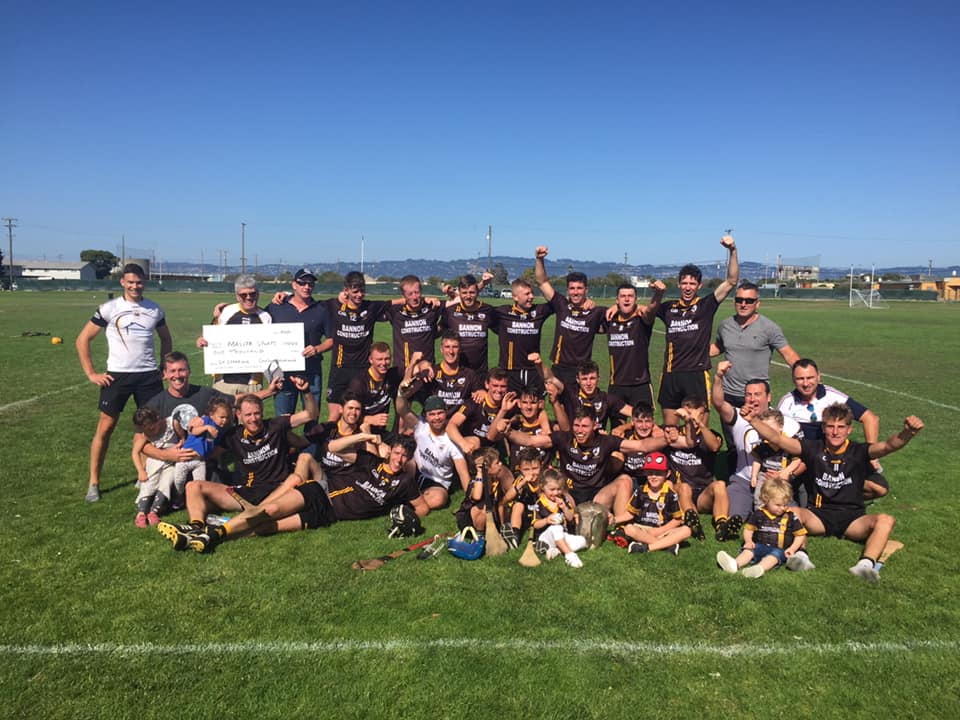 In Sunday's final, Tipperary came out with all guns blazing and looked like they were going to blow us off the field. They had 3 points on the board before we even got out of our own half. A monster score from play by Brian Cody followed by a tricky free converted by Rory Hayes settled us down , but Tipp quickly hit 1-02 unanswered giving them a 6 point lead. Slowly but surely, our boys began to settle and started to hurl, our half backs and midfield began to get on loose ball, Shane Murphy thundered into the game at half forward , and Eoin O'Neill began to make an impact too. Our full-backs, who were marking 2 household names, began to come to grips too after a difficult opening and, with Rory Hayes imperious on the frees, we hit 6 of the last 7 scores of the first half and went in level at halftime - Tipp 1-07 Na Fianna 0-10.

In the 2nd minute of the second half, we turned over a ball deep in Tipp territory. Suddenly Eoin O'Neill was through on goal and the Dunloy Dynamo did what he does in that situation, and buried the ball in the net , giving us a lead that we would not surrender. Rory tacked on a free and we hit another from play and were, unbelievably given the start of the game, 5 points clear. Tipp are a serious outfit though and came roaring back at us hitting 3 points on the bounce to cut the lead to 2. In a game that was quickly becoming a classic, Brian Cody - he of the famous surname and equally famous bloodline- , goaled at the 2nd attempt and put us back up by 5 with about 12 minutes left on the clock. Again Tipp would not go away, Jack Guiney got as good a score as we have ever seen on Treasure Island when he fielded a puck out in traffic and pointed from beside the sideline about 70 yards out. It was still a 4 point game with 59 minutes on the clock when Eoin O'Neill pounced again, his clinical finish was greeted by a mighty roar from the stand as it put us 7 points clear.

Little did we know however that there were 6 torturous minutes of injury time to be played. During this period Tipp had us under pressure and won 2 penalties. With the first of these Guiney hit a rocket of a shot to the top left corner trimming the deficit to 4 points , thankfully for us his 2nd effort barely cleared the crossbar and we were still a goal to the good.

Although out on their feet, our backs were like frenzied dogs around every ruck and came out with a few vital dirty balls. Eventually Matthew Mouse Fogarty won possession and, as one observer said, looked like he was going to keep running until he reached the Abbey Tavern. This 60+ yard run sealed the deal and the final whistle, which arrived seconds later, was seeet music to our ears.
The cup was presented , amid great scenes, to our Captain Eoin Soup Condon who proceeded to give a fine speech as Gaeilge.

We would like to thank Tipperary SF for a fantastic sporting game and it was great to see many of their players, as well as a few Naomh Padraig stalwarts, in the Abbey Tavern on Monday evening. While we are the fiercest of enemies on the field, there's no reason why we shouldn't be mingling together off it. Chippendales haven't seen as many lads with their shirts off as the Abbey did on Sunday and Monday.
The next step in our adventure is a place called Leesburg, Virginia where hopefully we can add another trophy to the cabinet.

Congrats and a big thank you to our management team Diarmuid McCarthy. Brendan Bannon, Sully and Frank O'Rourke and to all our supporters and contributors to our fundraising. We couldn't continue without your unstinting support.
Thanks to Tipperary SF, Naomh Padraig, St.Joseph's and, the new hurling team in the Western Division, San Diego foe helping to keep this great game alive in the Bay Area.