U16s defeat Corofin/Ruan Combo in Round 3 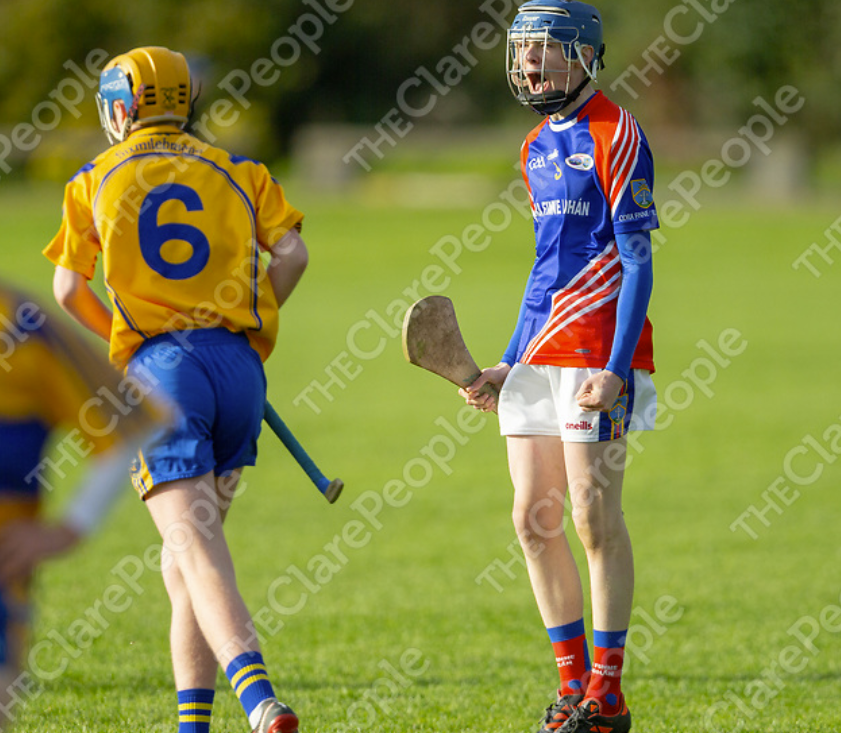 Sixmilebridge Under 16’s were in action last Sunday afternoon when they were at home to Corofin/Ruan in this Round 3 U16A Championship clash. The ‘Bridge got off to a flyer all over the field and were winning everywhere except where it really mattered, on the score board, with four wides in the first four minutes. It was Corofin/Ruan who opened the scoring in the 5th minute when Cillian McGroary made a good run from his own backline hitting between the posts.

Two minutes later a disputed side line ball on the ‘Bridge 65 metre line turned into a free for Corofin/Ruan and Cillian O Connor sent a high long range free into the ‘Bridge goalmouth where it was pulled on first time by Eoin O Brien into the back of the Sixmilebridge net. Two more Cillian O Connor points had Corofin/Ruan 6 points clear with the ‘Bridge yet to register a score. They finally got going with an Evan Murphy free out on the side-line 10 minutes in followed by a good Seamus O Connell point a minute later.

Over the next ten minutes Corofin/Ruan began to pull away leaving the ‘Bridge again trailing by 6 points with 5 minutes left in the half. The ‘Bridge did however finish the stronger of the two teams exerting the greater pressure scoring four unanswered points the pick of which was a long range over the shoulder effort from Luke O Halloran to go in at the interval 2 points behind with wind advantage to come. Halftime score Corofin/Ruan 1-7 Sixmilebridge 0-8.

The second half started with another two disputed side line balls hotly contested by both sides. The result being momentum shifting once again in Corofin/Ruan’s favour as they notched up the first three points of the half all from play and appeared to be getting on top in their forward line. Luke O Halloran kept the ‘Bridge in touch with an excellent long-range free from the side line and from there the ‘Bridge got going.

With their midfield and half back line really beginning to get stuck in Corofin/Ruan were finding it difficult to get scores and as the game opened up the ‘Bridge forwards finally got their act together with David Kennedy, Noel Flynn, and Seamus O Connell scoring 3 points in two minutes all from play, and when Conor Murphy joined them with one of his own on 15 minutes the sides were level. Jack McDonagh did put Corofin/Ruan back in front with a free on 18 minutes but it was a temporary ‘Bridge set back which Luke O Halloran soon rectified a minute later with a free of his own. When Colm Flynn pointed with five minutes left the ‘Bridge finally went in front and they were four points to the good as the game moved into injury time with David Kennedy slotting over the last of five ‘Bridge points in a row and looked to have it won.

With almost nine minutes of injury time to come due to a prolonged stoppage from an earlier injury to Cillian McGroary (Corofin/Ruan), there was plenty of time for the visitors to rescue the game. To their credit they gave it their all and laid siege on the Sixmilebridge goal with Ryan Power hitting over after several attempts at finding the net. Corofin/Ruan were awarded three close in frees such was the pressure they were putting on the ‘Bridge backs who to their credit weathered the storm admirably. Three strikes at goal and three good saves were made with Cillian O Connor gaining possession and striking just too high over the bar in a last frantic scramble to get that elusive goal. The ‘Bridge defence prevailed and they ran out two point winners in a tight, gripping and sometimes cantankerous game of hurling.

For Corofin/Ruan, Ryan Power midfield, Eoin O Brien full forward, and Jack McDonough corner forward were excellent with O’Brien whilst being, small was lighting quick in around the ‘Bridge goal.

For Sixmilebridge, Oisin Breen midfield, and Seamus O Connell wing forward, were top class whilst Luke O Halloran half forward, really kept the ‘Bridge in this game especially with his first half performance.