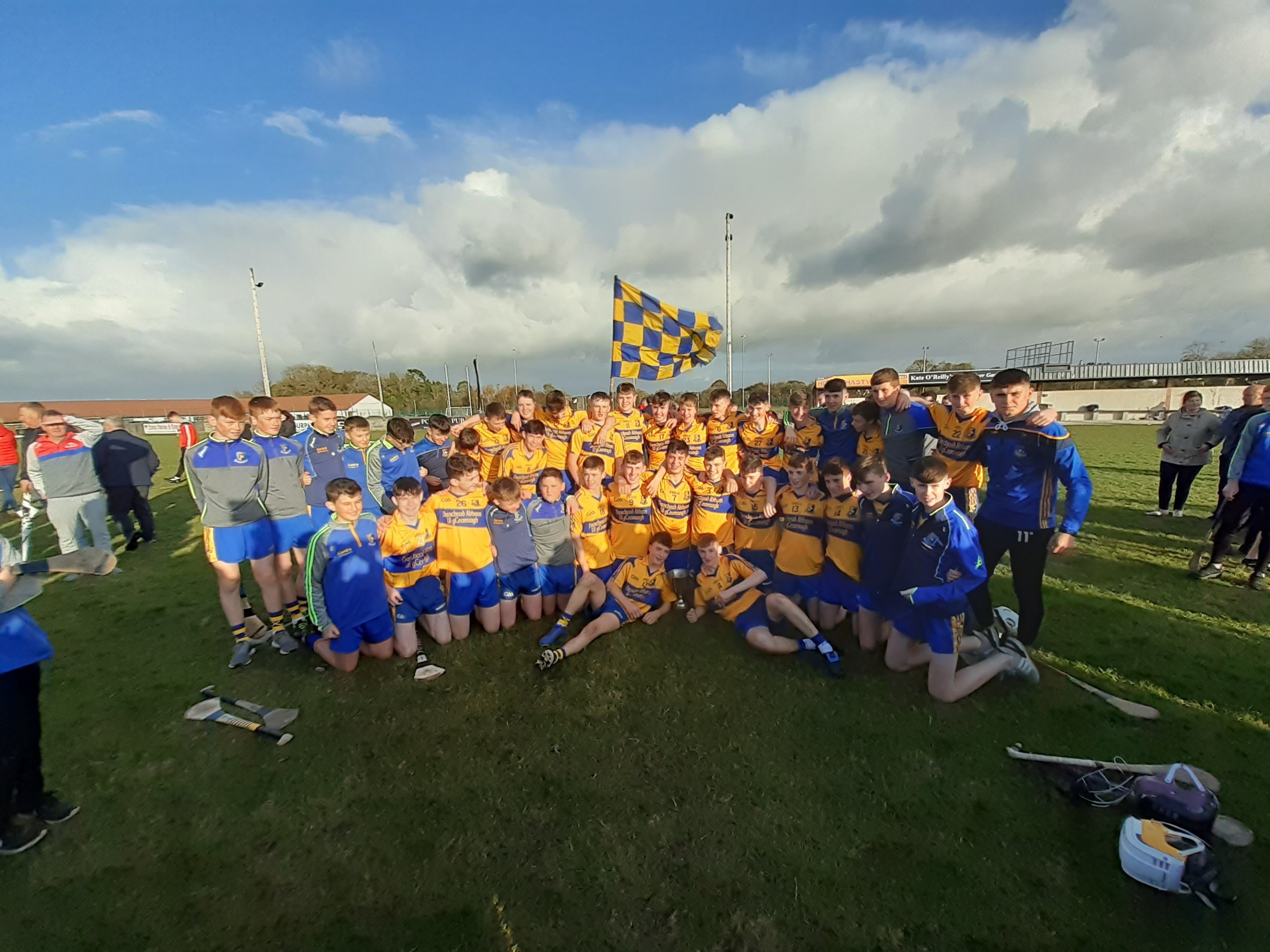 U16 Hurling A Championship Final

Sixmilebridge Under 16’s travelled to Clarecastle last Saturday for this Under 16A County Final clash against Corofin/Ruan. It was a repeat of last years final with the ‘Bridge hoping to reverse the outcome this year. Evan Murphy (Sixmilebridge Captain) won the toss and elected to play into the face of a significant breeze in the first half. The ‘Bridge started brightest and exerted good pressure on the Corofin/Ruan goal for the first five minutes but had nothing to show for it on the scoreboard.

Then in the space of 4 minutes Corofin/Ruan were 4 points clear thanks to Killian O Connor with two from play and two from placed balls. The Bridge didn’t panic and Noel Flynn finally got them up and running 10 minutes in with a fine point followed a few minutes later with another from Luke O Halloran out on the wing. Both sides were well able for each other as several tussles all over the pitch were intense with no one yielding. Killian O Connor slotted over three more frees for Corofin/Ruan while Luke O Halloran did likewise for the ‘Bridge.

It was a case of who was going to get the break needed to break the deadlock. It finally came 25 minutes in when Noel Flynn won possession from a pass from Dara Casey out in the corner. He let it off to David Kennedy who was immediately closed down by a lighting quick Kealan Mounsey in the Corofin/Ruan goal. Kennedy was brought to ground but still managed to get a flick past Mounsey into the back of the Corofin/Ruan net. It was Kennedy again that brought sides level as the game entered injury time and the ‘Bridge looked like they had weathered the storm.

There was however one more twist as a high ball was sent into the ‘Bridge goal mouth and in the ensuing scramble Adam O Loughlin was quickest to react sending the ball into back of the Sixmilebridge net. Luke O Halloran tempered this set back slightly with the last score of the half with a pointed free. Half time score Sixmilebridge 1-6 Corofin/Ruan 1-8.

Now with the aid of the elements the ‘Bridge started the second half well with Evan Murphy reducing the deficit to a minimum 3 minutes in with a cracking point. It took another lighting quick reaction from Kealan Mounsey in the Corofin/Ruan goal to thwart a Dara Casey strike at goal on six minutes when he came off his line and closed him down. But the signs were there, the ‘Bridge had an edge to them, and they were relentless in their attacks. Three more ’Bridge points from play from O Halloran, Murphy, and Kennedy, with James Organ and Eoin O Brien scoring two for Corofin/Ruan also from play and the ‘Bridge had finally edged in front.

It was a lead they wouldn’t relinquish as the ‘Bridge defence wore down the Corofin/Ruan attack. As the game entered the final quarter Dara Casey won possession out on the wing and laid off a good pass to Noel Flynn who used his pace to run at the Corofin/Ruan goal hitting a bullet of a shot into the back of the net. This was followed up with five more points from play from the ‘Bridge as they pulled away coming down the stretch. Eight points clear and now in time added on it looked like the ‘Bridge had won it comfortably.

They got complacent and when Corofin/Ruan got a free 35 metres out Killian O Connor sensing no rush in defending the ‘Bridge goal hit a pile driver into the back of the net. Dara Casey did push the lead back out to five points but again Corofin/Ruan came at the ‘Bridge defence. With all the Corofin/Ruan players now in the ‘Bridge half, Ryan Power ran at the ‘Bridge backs and was swarmed to keep him out. He somehow managed to get a hand pass away to Darragh McInerny who buried it to leave 2 points between the sides. With the four minutes of injury time now played Corofin/Ruan had run out of time. From the puckout Fearghal Gray blew the final whistle and Sixmilebridge were under 16 A county Champions for the Thirteenth time in the club’s history.

For Corofin/Ruan, Kealan Mounsey was razor sharp between the posts displaying very good reading of the game. Marc O Loughlin and Darragh McInerney were very solid in the full back line. Killian O Connor was very good on the frees and was very quick to spot a gap in the ‘Bridge defence at the end to score a cracking goal.

For Sixmilebridge, Morgan O Connell and Evan O Callaghan were rock solid in the full back line throughout. Cian Gleeson gave an excellent display at half back given he was tasked with marshalling Corofin/Ruan’s most dangerous player. Most importantly his discipline was top class given the potency of their free taker. Further out the field Colm Flynn put in a good shift in midfield whilst Noel Flynn and David Kennedy were very dangerous in the ‘Bridge forward line. To be honest this was an excellent display from the whole Sixmilebridge squad who have endured heartache in finals in recent years. On Saturday they came out the right side of it and from the look on their faces they fully appreciated the significance of their victory. Well done Boys. Sixmilebridge Abu. 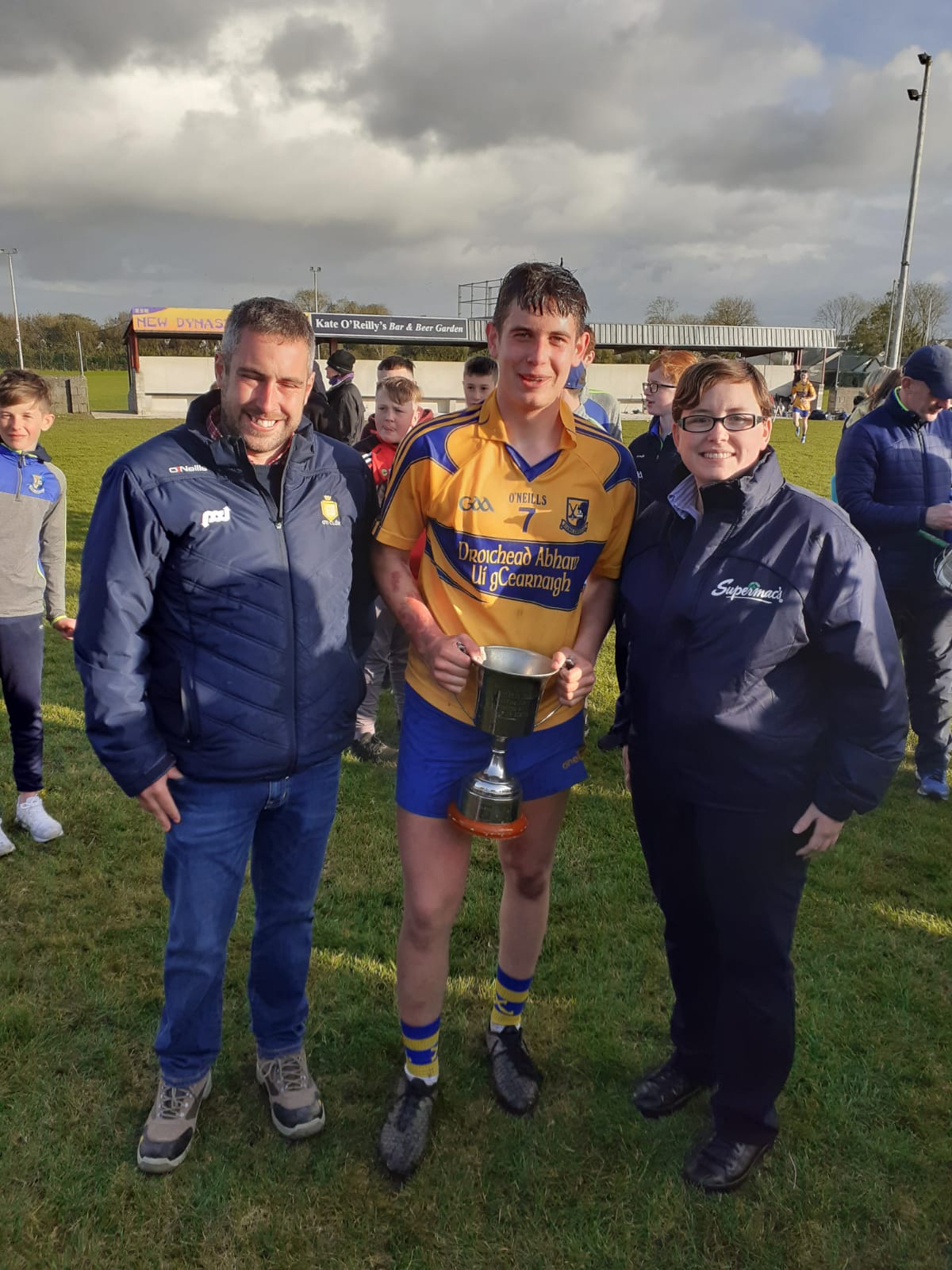 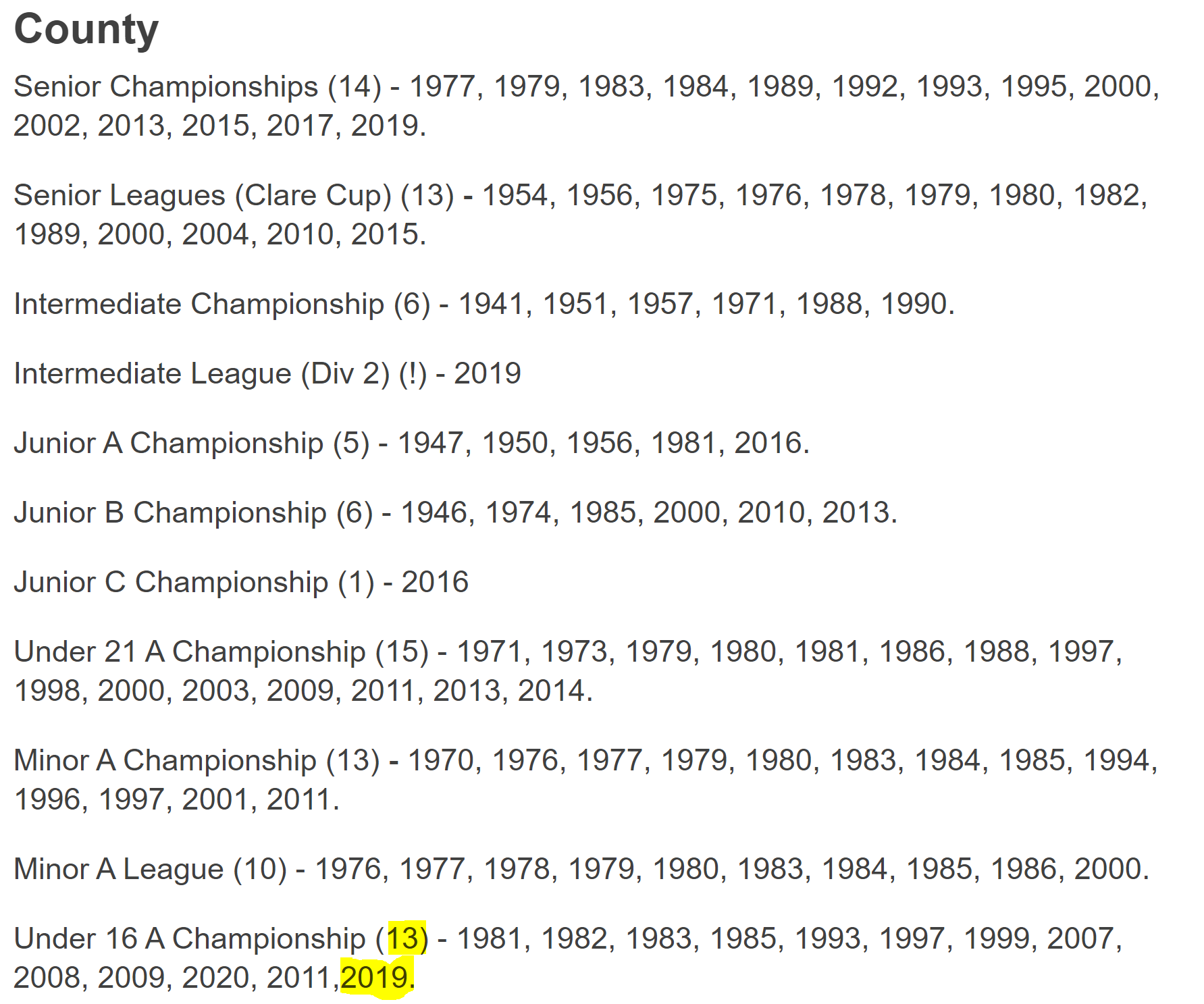