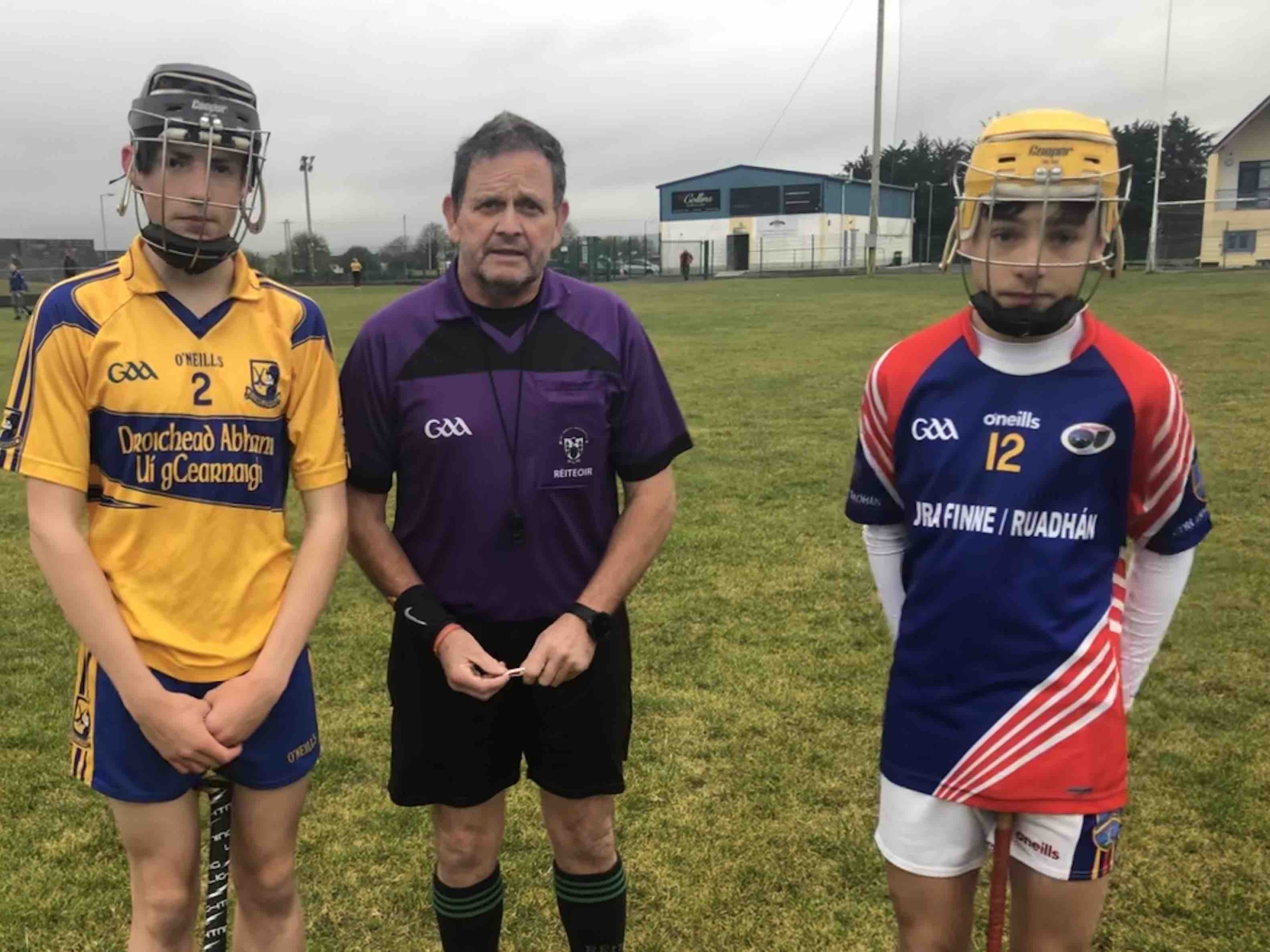 The Sixmilebridge Academy team played the final of their championship on Thursday evening in Clarecastle against Corofin/Ruan. The game was played in ideal conditions which set the stage for a tight and intense battle between two good teams. Two minutes in Kealon Mounsey opened the scoring with a well struck free which gave his team an early advantage. Fionn Hayes was accurate two minutes later when he slotted the ball between the posts to level the game at 1 point each. Corofin/Ruan outscored the ‘Bridge by five points to two for the rest of half with Adam Murray scoring both points for the ‘Bridge and James Organ scoring three for Corofin/Ruan. However just before half time the ‘Bridge had an excellent goal chance. Jack Lee was 6 yards out from goal and he pulled on the ball, but it hit off another teammates leg which unfortunately stopped the ball on the line which put an end to the half as Corofin/Ruan managed to win a free out and then the half time whistle was blown. This left the half time score 6 points to 3 in favour of Corofin/Ruan.

The ‘Bridge started quickly in the second half with Fionn Hayes getting a great score in the first minute. 4 minutes later James Organ scored his fourth point of the game and so took his team back into a three point lead again. From the 6th to the 17th minute of the second half Fionn Hayes and Adam Murray both got on the scoreboard with the two of them combining to score 4 points for the Bridge.  In this period James Organ and Alan Woodford also got one point each for Corofin/Ruan leaving them in the lead by 1 point with 13 minutes to go. The Bridge made 4 changes in the last 15 minutes. The subs that came on were Seamus O’ Connell, Morgan O’ Connell, Michael Carey and Ian Collins but unfortunately despite the late pressure that the ‘Bridge put on the Corofin/Ruan back line they were unable to find a way through and so Corofin/Ruan won the championship by one point.

For Sixmilebridge Gary o’ Callaghan and Brendan Carey were very good and fought extremely hard. Conor Gilligan was also a great leader at centre back and cleared a lot of ball.

For Corofin/Ruan Alan Woodford and Kealon Mounsey were very strong and won their battles on the pitch. Also James Organ was very good scoring 5 points 4 of which were from play.

Sixmilebridge management made a decision to start with Academy players rather than use the ‘A’ players that were eligible to play in this game thus ensuring game time for everyone. The importance of the Under 16 A Academy championship cannot be overlooked as it provides valuable game time for the under 16’s of next year. After seven very competitive games the younger ‘Bridge under 16’s came up short by one point. The experience gained will stand to these boys next year.