Down Memory Lane - 24 Years ago today 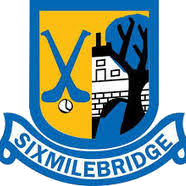 While the country celebrates 100 years since the Rising in 1916 today has fond memories for all Bridge folk as we celebrate 20 years since Ian Mulready lifted the Tommy Moore Cup on the steps of the Hogan Stand. This day back in 1996 Sixmilebridge defeated Dunloy from the Glens of Antrim by 5-10 to 2-06 to become the first Clare club to win the All Ireland Club title.

Indeed this was a golden era of hurling for Clare and 4 Bridge boys in particular - Davy Fitz, Holla, Rusty & Fletcher who pocketed Celtic crosses with Clare either side of the club success (1995 & 1997). When the club finals throw in at Croke Park today we look back fondly on this day and dream of being back in Croke park on Club finals day. We also remember members of the setup who are no longer with us - Barry Quinn, Marty Murray & our great sponsor Dominic Murphy (Snr) of Shannon Precision Engineering.

During that final in 1996 a young 19 year old from Rossroe came on as a sub and hit 3 points from play - Some Gilligan fella - an inspiration for us all: **Age is a question of mind over matter. If you don't mind, it doesn't matter.**

Sixmilebridge struck for their first goal inside a minute when a long delivery was flicked by Gerry McInerney into the path of Danny Chaplin who pulled first time and netted from 15 metres. Dunloy recovered well and by the 16th minute Tony McGrath had sent them into a 0-4 to 1-0 lead. McInerney equalised for Sixmilebridge form a free and Danny Chaplin sent brother David in for the second goal after 21 minutes. Four minutes later Danny Chaplin created the third goal, this time for McInerney. David Chaplin and McInerney added points to open up an eight-point gap. David Chaplin was the hero scoring 2-1 while the ageless Gerry McInerney also played a vital role hitting 1-4.

Sixmilebridge's victory secured their first All-Ireland title. They became the 18th club to win the All-Ireland title, while they were the first Clare representatives to claim the ultimate prize.
Dunloy's All-Ireland defeat was their second successive defeat in a final after losing to Birr in 1995.

Summary of the game