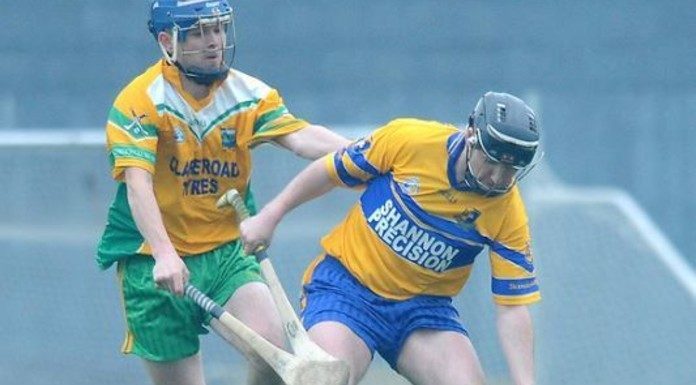 The final intermediate game of the weekend proved to be the most dramatic as these two second string sides shared 6-52 between them over a brilliant 80 minutes of hurling.

In the opening 60 minutes, it proved to be the quintessential game of two halves with Inagh-Kilnamona racking up 2-14 before the break, and Sixmilebridge doing likewise in the second period.

When the half-time whistle sounded, Inagh-Kilnamona led by 2-14 to 0-7 with both first half goals from Damien O’Halloran along with Barry Keating’s frees putting them in the ascendency.

This Sixmilebridge side were unlucky not to reach the last four 12 months ago, only losing out to eventual champions Broadford after a penalty shootout in their quarter-final tie. It means that their last two championship games have gone to extra-time, and this time it was a storming second half fightback that forced the added period. That fight back was sparked by goals from Christy Griffin and Lorcan Fitzpatrick, while Sean Lynch was in fine form from placed balls to see the sides tied at 2-21 to 3-18 at full-time.

It was Sixmilebridge who carried that momentum through to the first period of extra-time as they rattled off five points in a dominant early spell. It was enough to see them put some daylight between the sides at the break, as they led 2-28 to 3-19, with Keating firing another goal for the Combo.

Five more points followed in the second period and despite another green flag for Inagh-Kilnamona from Jamesie McConigley, the Bridge followed up their senior victory with another good win to run out 2-33 to 4-19 victors.

Last Saturday our U10 hurlers made their first trip outsi...