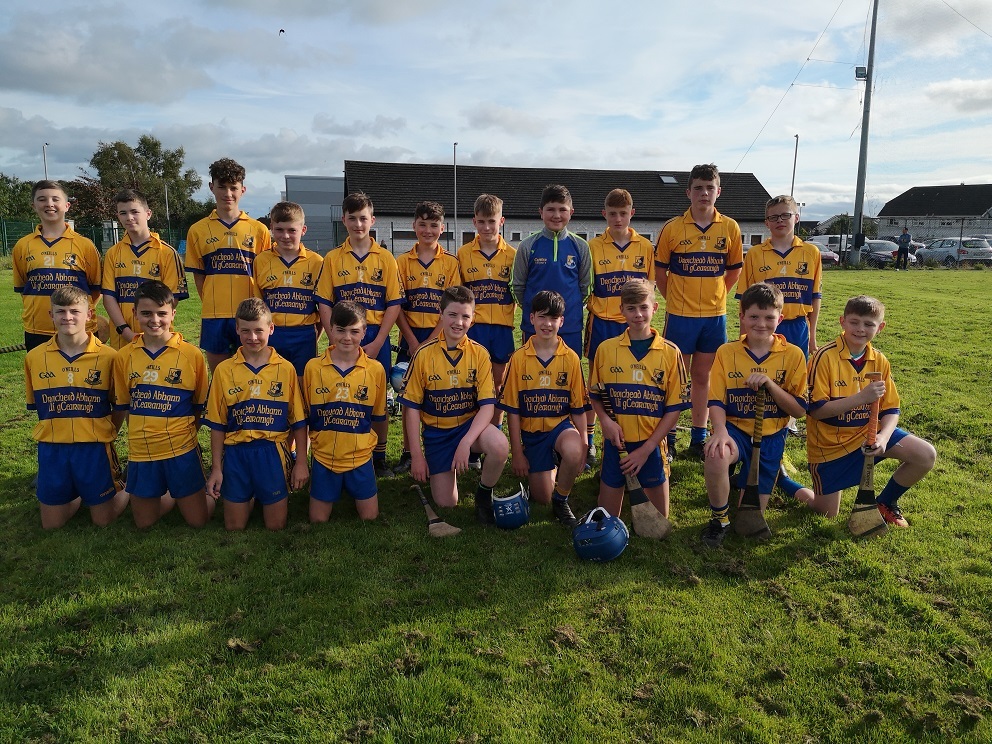 The first of 3 big knockout matches between The ‘Bridge and Eire Óg in the next week, saw first blood to the men from The County capital in this U14A Academy semi-final played on Sunday evening in Cappa Lodge. Our U14A squad also play them in a Co semi-final this Monday evening 7th Sept in Meelick.

The Ennis lads got off to the perfect start inside a minute with a wonderful point struck from near the sideline about 30 yards out by Ethan Boyle. This helped them settle down Eire og and they went on to dominate the first quarter. They struck for a first goal on 5 mins through Niall Doyle at corner forward and 2 minutes later the sharp shooting ciotóg rifled home another 3 pointer when he reacted quickest after a long Eire og free was not cleared by the Bridge defence.

The Bridge did react to this tough opening 10 mins through good work by Niall Moloney at wing back, Captain Rob Stafford at wing forward and Don Whitty centre forward. But they found finishing scoring chances a tough challenge, against a good Eire og defence while the tall and hard running Whitty at centre forward was finding it hard to be awarded frees for the “close attentions” he was receiving in possession compared to some of the other players on both sides throughout the match.

Up the other end, the in form Niall Doyle added another point from play and then after the water break the Bridge introduced some subs and made changes which helped tilt the momentum the home team’s way.

After a driving run by Full Forward Cathal Ahern, his rasping shot rattled the cross bar and from the rebound the ball was worked to Peter Gilligan who had made a run from midfield and his well struck shot off his left side flew into the far corner of the net. Spurred on by a Gilly-special the Bridge lads mounted several attacks and Cathal Ahern was fouled to leave Zak Phelan to convert the free. A couple more chances did go abegging for the Bridge lads and down the other end, Ethan Boyle hit another nice point from play to leave it at half time 2-3 to 1-1 to the visitors.

The Bridge started the 2nd half in determined fashion and Don Whitty latched onto a long John Deasy clearance, finally was awarded a free and Zak Phelan converted. A few minutes later the mounting pressure told, when Rory Chaplin gained possession, held off a couple of tackles and kept his composure to pick his spot in the far corner of the net and gave the keeper no chance with a sweet strike off his left.

The game was really tit for tat now as the play went up and down the pitch and central to the Bridge play was an outstanding energetic display by midfielder Aidan Moloney who seemed to latch onto every clearance by the Eire og defence and he was ably assisted by his brother Niall, and also Daighre Clarke. However when it came to scoring the townies were proving to be more economical as Brian Lynch - who was their goalie in the first half - scored a fine point. They then followed up with a goal as a well worked passing move saw the final handpass inside to Charlie O’Doherty who dispatched to the net very coolly. 3-4 to 2-3 to Eire og at the water break.

After the water break the Bridge lads tried with all their might and got a reward when Rory Chaplin pointed a free after Zak Phelan was fouled. Eire og went back up the pitch and got a point through a pointed free from Cathal Lynch.

From there to the end the ‘Bridge pressed hard and Don Whitty got a reward for his efforts all through with a cracking goal to the roof of the net with a shot from 20m out. His teammate Shane Connors was positioned smartly on the edge of the square and his flashing hurley as the ball went by ensured the keeper was distracted enough not to get a save on it.

The Bridge pressed hard but were left to rue some missed frees and 65’s and other long range frees which dropped short and try as they might they couldn’t get the elusive goal to salvage a win.

So their U14A Academy interest comes to a close, as Eire óg march on to the final and we wish them all the best in that. Hopefully for the majority of these players, Bord na nÓg Iomaint an Chláir will go ahead with their plans to hold an U13 Championship and the 14 year olds involved can join up with the U16 Academy squad in a competition at that age group as well.

But for now we hope that by this time next week, all ‘Bridge supporters will be agreeing with Meatloaf’s famous words that “2 out of 3 ain’t bad…” as we face off against the townies in the U14A Semi-final, and of course the County Senior Championship semi-final next weekend.