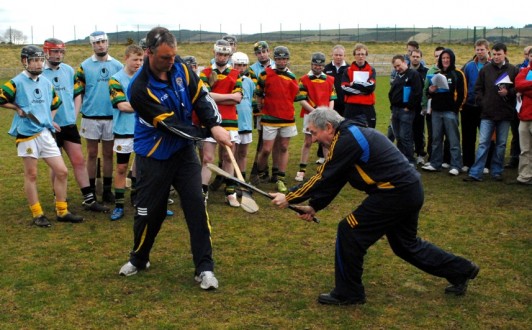 Referees get a lot of stick from supporters, especially if a team loses as a result of a poor refereeing decision. It is hard not to feel sorry for Scotland in the aftermath of their exit from the rugby World cup. In all sports, referees are likely to make errors. I once read that the average referee in top soccer, rugby and GAA matches are correct 92% of the time. Sometimes referees get criticised even when they make the correct decision. We, in Clare, were extremely critical of the referee after the 2008 Munster final, even though he did apply the rules. Unfortunately some of the incorrect decisions that referees make are devastating for teams that don’t get much success. The goal awarded to Meath against Louth in 2010 is one example. Aids like Hawkeye, television match officials and goal line technology decreases the danger of human error affecting the result of the game.

Sometimes in our job, we have to step in to referee games. Often these are under 8’s or 10’s blitz games. Usually it is very easy. You throw in a ball and you find that you don’t even have to blow the whistle because the game flows. All players keep the rules and the referee is practically anonymous. Occasionally, though it is more difficult. Players break the rules, the game is scrappy and you find yourself constantly deciding whether to give a free or to let the play develop. Sometimes it seems that the decisions you make aren’t balanced. You may give 7 frees to one team and no free to the other team and you start to question whether or not you are biased. Sometimes you feel sorry for the team that is losing and become a little lenient on them. You feel at under 8 or 10 that it doesn’t matter but I’m sure that referees at the highest level experience similar emotions.

The main task of a referee is to ensure the safety of players on the pitch. Referees are governed to apply the rules as set out in the rule book. It is the job of the players and coaches to play the game in accordance with the rules. It is not the job of the referee to ensure that the game is entertaining and not the referees fault if there are too many frees in the game. The referee should award a free or an advantage every time a foul is committed irrespective of how many fouls have been committed up to that point. Referees should not let the game flow by ignoring fouls during the match.

If you were to ask a group of players, spectators, coaches or players what their biggest issue is with referring, the vast majority will point to inconsistent decisions. What was a foul in one match is allowed to happen now. Some feel that referees are too strict and that they should let the game flow. Others feel aggrieved when fouls are allowed to go unpunished. People also say that they would like our games refereed with “common sense”.

The danger about refereeing with common sense is that we are no longer governed by a set of rules. What is common sense? Is common sense allowing a player to take 5 or 6 steps with the ball in his hand but blow a free if he takes 7 steps? For some people that would seem like a common sense thing to do even though the rule states 4 steps. Should a referee allow a player to pull another player’s jersey for half a second but blow a free if he pulls it for 1 second? Again some people would think that would be common sense. One person’s common sense might be another person’s violation of our rules. We have a set of rules that can be amended and changed should the majority of people want to do so. When the rules are applied then a fair game can take place. Without rules there is no fairness.

From conversing with referees, two things annoy them. Firstly the general public’s (including coaches and players) lack of knowledge of the playing rules and secondly coaches teaching their team to get away with fouling. Recently at a coaching course we had a great tutor called Pat Moore who tested us on our knowledge of the rules. Many of us who consider ourselves to be good coaches had to admit we were unsure about lots of situations that may arise in matches. Without full knowledge of the rules we cannot call ourselves good coaches. Coaches need to know the rules in order to prepare their teams.

In order for our games to occur five sets of people are needed. Administrators organise the running of the game, backroom teams organise the players, referees apply the rules and players play the game. Spectators pay to watch the game and their money is used to promote the games further. It is very seldom after a game that you hear any one individual or sector saying “sorry I messed up”. Instead we hear thing said like “he shouldn’t have been on the team”, “we need to change our coach”, “the county board haven’t a clue”, “our supporters didn’t get behind us” or “we would have won it if it wasn’t for the referee”. That culture is called “deny and blame” – deny that I have any responsibility and apportion blame to someone else.

Recently I was asking a friend of mine why a player wasn't making one of the top teams in the country. He replied “he had been giving away too many frees. Other lads were fouling but weren't giving away frees”. It reminds me of a lot of the behaviour in the banking sector during the Celtic Tiger. It was ok to break the rules once you weren't caught. Those who got caught were seen as foolish but ultimately we all paid the price. We can coach our players to break the rules in the hope that they don’t get caught but are we serving our games or association well by doing that in the long run? Many will feel that the end justifies the means. In a win at all costs culture that is what happens. Just as long as we remember that we will always need referees if our games are to survive. It is difficult enough to recruit referees without making their job more difficult.