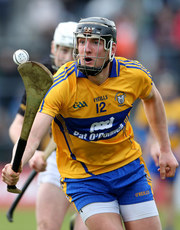 Well done to Shane, Davy and the Clare lads - Tis only January but a positive start

A very decent crowd of 4,853 saw an entertaining Munster senior hurling league final in the Gaelic Grounds Saturday evening, Clare coming out on top for the first silverware of the season thanks to two late scores from Cathal O’Connell.

Neither manager was getting carried away with a display which showed wayward radar and rusty touches. Clare boss Davy Fitzgerald put in perspective after the game.

“We didn’t focus too much on hurling for the last month, six weeks, to tell you the truth, and you could see that,” said Clare boss Davy Fitzgerald. “It was competitive, both teams wanted to win. Winning is a habit, and last year we were on the wrong end of seven or eight defeats by a point, or one score.

“There’s nothing won in January - well, we’ve won something in January! - but it’s a good workout for the league.”

Limerick were sharper early on, hitting three points to Clare’s one in the opening minutes - Paul Browne and two Declan Hannon efforts, one a free. The home side were also intercepting Clare handpasses and deliveries, dictating the play - two good points, from Cian Lynch and Darragh O’Donovan, pushed them 0-5 to 0-2 up on ten minutes.

A minor fracas on the covered stand sideline seemed to spark Clare into life - they hit four points in four minutes at the end of the first quarter: two from Colin Ryan (one free), Bobby Duggan and John Conlon doing the business.

Neither side could establish a significant lead, however, in the run-in to half-time: Barry Nash (a beauty from the sideline) and Peter Duggan swapped points to keep Clare one up, but another good Nash score made it seven apiece on 24 minutes. Bobby Duggan and Lynch exchanged points, then David Fitzgerald and Paul Browne swapped scores. Ditto Hannon (free) and Conlon.

Clare put daylight between them in the minute before half-time, though, with a terrific Conor Cleary point from the wing augmented by a Peter Duggan score to leave it 0-12 to 0-10 at the half. The Banner pushed further ahead on the resumption, Peter and Bobby Duggan points and a Ryan free giving them a 0-15 to 0-11 lead ten minutes in, though Hannon pulled one back with a Limerick free and Nash hit another point.

The intensity dropped as the second half wore on, with Clare maintaining that two point gap going into the final quarter and both sides missing chances.

Sub Pat Ryan cut Clare’s lead to the minimum with fifteen minutes left, but his namesake Colin restored the visitors’ two-point advantage with yet another free. Nash levelled matters with four minutes left, but then came O’Connell’s decisive intervention.

In the green and white corner thoughts were already turning to the league.

“These are big games, competitive games, and you’d have to be pleased with the way they performed tonight,” said Limerick manager TJ Ryan.

“With the Fitzgibbon Cup, and a club U21 competition kicking in, we have a number of players on our panel involved in those, so I don’t think there’ll be time for a (challenge) game before the league.

“This hasn’t been ideal, playing three games in one week, but that couldn’t be helped. We had a big crowd tonight, which I’m sure the Munster Council will be pleased with, and the fact that we had competitive games is good.

“Our difficulty is that we have eight guys on the Na Piarsaigh panel and we won’t have them - it’ll probably be the end of the league before they come back.”

“They’ve worked extremely hard,” said Fitzgerald. “The big thing for us was whether we had that bite and hunger for the last year or two which we should have had, and which we had to a degree.

“We needed to up that a lot, I think they’ve started that way and we’re just looking forward to what’s coming ahead of us.”