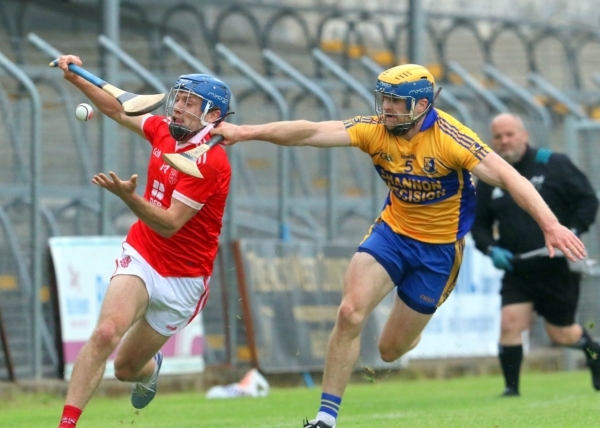 The Bridge kept their hopes of defending their counthy title alive following a 1 point win over Eire Og at Clare GAA HQ on Saturday evening. Alot of the pundits had tipped the Townies to dethrone the champions and given their recent run of form along with the return of 2 big players who missed out on the round defeat to the Bridge we were all wary.

However these Bridge boys are made of stern material and the experience of winning close games really stood to them as they weathered an early Danny Russell storm and settled into their game to trail 0-04 to 0-05 ath the water break.

Coming up to half time a free from David Reidy was doubled on by Danny Russell to raise the only green flag of the day and put the townies 4 points clear. Shortly after this Eire Og were awarded a penalty and up stepped Russell - Faced by the outstdanding goalkeeper of the Clare Championship for the last number of years his shot was stopped by the excellend Derek Fahy in the Bridge goal and this meant the Bridge trailed by ony 4 at half tine on a score of 1-9 to 0-8.

By the 11th minute of the second half the Bridge had tapped on 5 points and went into the lead for the first time following a jamie Shanahan point but Russell levelled quickly to see the score all square come the 2nd half water break.

Following the break Russell put the Ennis side back in front while the Bridge added points from Alex (2) and Alan Mulready to take a lead they would not relenquish.

The win sees ths group of players back in their 6th county final in 10 years which is a phenominal achievement in any sport. The final will be a massive battle with our neighbours O'Callaghans Mills who defeated Ballyea yesterday and the build up is sure to be miight craic between the 2 sets of supporters. Bing it on and get your flags and colours flying high.