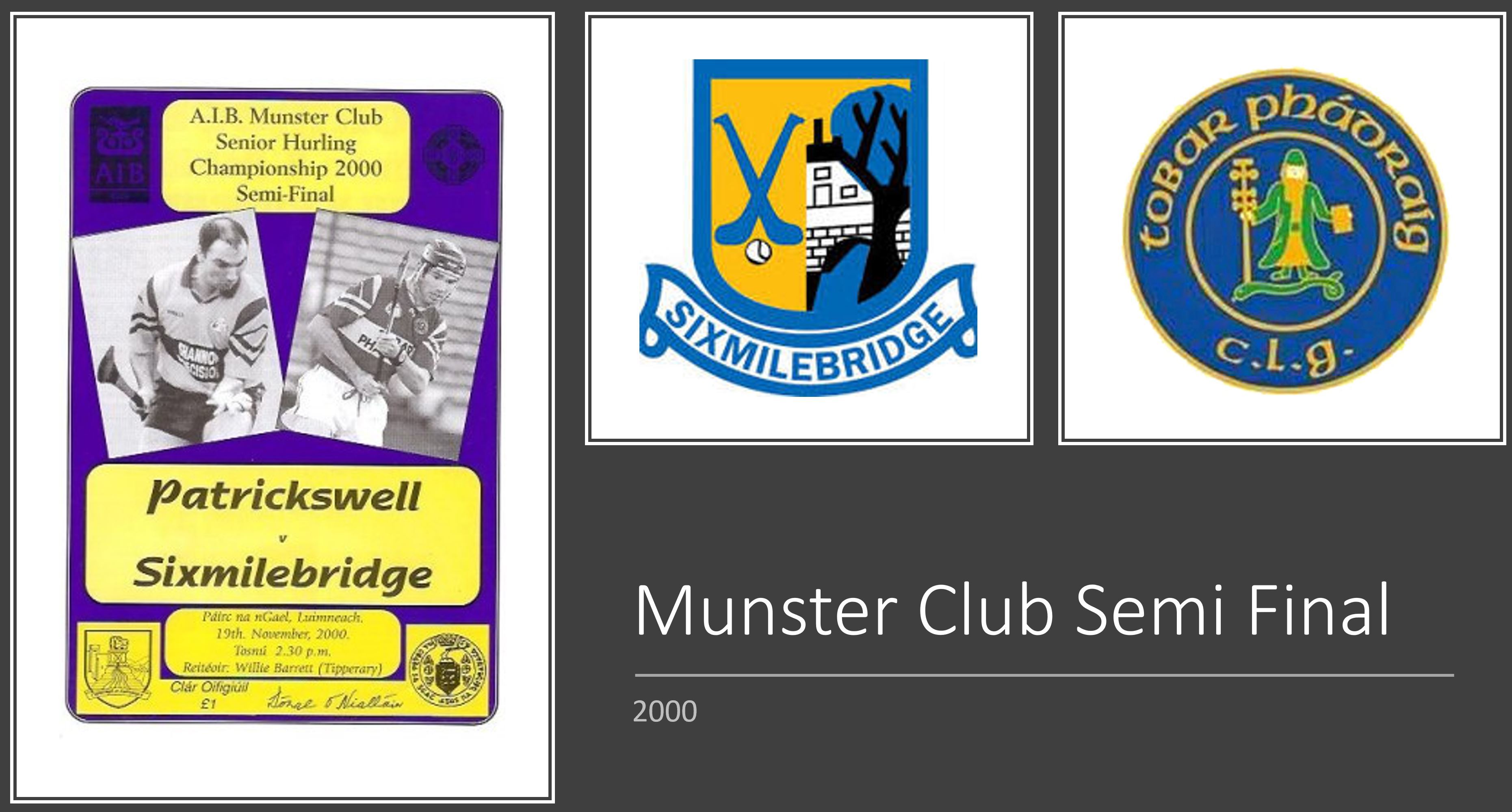 Around this time 20 years ago the Bridge beat Patrickswell in a classic in the Gaelic Grounds on their way to winning the Munster Club title. Sadly Paul Carey who was part of the 'Well team passed away earlier this week following a car accident in Dubai and we would like to pass on our Condolences to his family, they Carey family and all in Patrickswell GAA.

An interesting observation when you look through the Bridge team is how 11 of the players are currently involved coaching teams in our club now which is a a testament to the lads in giving back to the next generation. Davy Fitzgerald (Seniors), Adrian Chaplin (U12s,) Alan Mulready (U10s), Pat Hayes (U10s), Declan Murphy (U8s), Stiofan Fitzpatrick (U8s), Martin Conlon (U10s), Brian Culbert (U16s), Niall Gilligan (U6s & Intermediates), John Chaplin (U14s), John O'Meara (Minors).

Take a trip down memory lane....

SOME old murmurs of Banner defiance in the brown glue of Limerick's Gaelic Grounds yesterday as Sixmilebridge edged a rollicking AIB Munster Club hurling semi-final. But it was suffocatingly close against near neighbours, Patrickswell. We were three minutes into injury time when that venerable duo, Gary Kirby and John O'Connell, went shoulder to shoulder near the end line. The sliotar spilled almost lazily behind them, as if it was caught for breath. Patrickswell's '65. A great howl erupted in the Mackey Stand. One point adrift, the 'Well were saved. After all, Kirby's socks could be on fire and he'd still steer you home from this saloon.

But, when the ball came out, Gary didn't follow. He couldn't. Torn ligaments in his shoulder had begun to seethe. I knew I was only fooling myself if I came out and tried to take it, Kirby confessed later.

So young Eoin Foley crouched over the sliotar and the coiled, tremulous hush that descended was like a graveyard breeze. He lifted, he swung, he squinted. The ball soared towards the right-hand post, then gently spilled east and wide.

As Davy Fitz moved to restart, Willie Barrett caught the goalkeeper's eye and spread his arms wide. After 63 minutes of searing combat, the 'Bridge had made it home.

They now meet Waterford's Mount Sion at Semple Stadium in next Sunday's provincial final, though hospital visits may be required today to ascertain whether John Chaplin (suspected broken hand) and Niall Gilligan (concussion) will have roles to play in Thurles.

Whatever the prognoses, few should doubt that the 'Bridge are right back in the bullish groove that brought All-Ireland glory in '96.

They had many cornerstone figures yesterday, but two especially caught the eye. O'Connell and John Reddan. The former a wily, resolute 35-year-old full-back, browbeaten out of brief retirement. The latter a big, resourceful kid with the ability to lob improbable points over either shoulder.

Sixmilebridge manager Paddy Meehan described O'Connell's contribution yesterday as one of the great full-back displays and no-one was inclined to upbraid him for wild rhetoric.

O'Connell thieved the spirit of a succession of opponents, mixing wisdom and craft with the incorrigible will of a man reprieved.

His hurling did the talking today, said Meehan. Never write off a 35-year-old. Because that man is unbelieveable.

Yet, Reddan was the star-turn. Named at midfield, he lined out on the 'forty in direct conflict with Ciaran Carey. Five points from play later, he watched an ashen Carey ushered aside for full-back Anthony Foley to try roping the Clareman down.

Carey went back to number three and the less quarrelsome challenge of policing Gilligan. When Ciaran Carey's will is broken, it's time to man the lifeboats.

To be fair, the 'Well were not inclined towards excuses. Kirby's injury, sustained in the replay win over Toomevara, offered convenient appeal. But team-boss PJ O'Grady sided only with magnanimity.

I'm just proud of our players, he reflected. On the run of play, the 'Bridge were that bit better than us today. But there's no shame in that. We've known them down the years and they've known us. There was never going to be much between us.

The wind at their backs, Patrickswell made the early running and led 0-7 to 0-2 after 19 minutes, their half-forwards looking especially sharp. But, with Gilligan coming out to left-half forward, the 'Bridge ship steadied and they trailed by a reasonable 0-6 to 0-10 at half-way.

Six of the Limerick points had come from Kirby (four from frees) and, yet again, the old war-horse was concentrating opposition minds.

We reckoned we had to stop giving Kirby frees in the second-half, reflected Meehan. And this they did.

In fact, Kirby did not score again, the momentum switching inexorably as Reddan went to town at centre-forward. By the time he claimed his fifth point with nine minutes remaining, Sixmilebridge were 0-12 to 0-11 up and - seemingly - close to harbour.

But Barry Foley dredged up a glorious right wing equaliser with five minutes remaining and, thereafter, it became a battle of will, not stickwork.

With the pitch now rutted and heavy, Sixmilebridge blew three consecutive scoring opportunities through Gilligan, Martin Conlon and Stiofan Fitzpatrick. The misses brought us into injury-time. Maybe 4,000 folk began to ready themselves for an Ennis replay.

Then Brian Culbert dug one out of the glue, fed Conlon and the veteran swung home a winning score. All that remained to quarrel over was that '65 and what might have been if Kirby was moving freely.

Must have been a good one, volunteered O'Grady.

The truth lay somewhere in between.

The children of Kilmurry school were busy practicing thei...

The GAA has confirmed it's panel of referees for the 2021...

Our U8s and U9s got their Go Games season off to a start ...