Reddan in flying form for Warwickshire 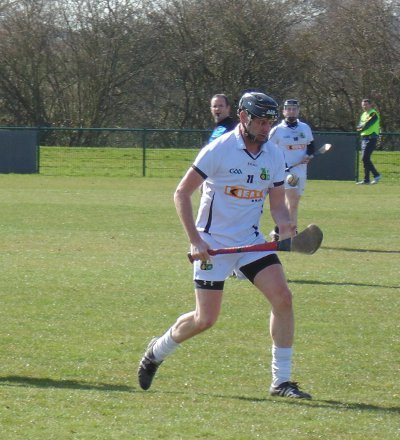 Best wished to John Reddan who lines out with Warwickshire in the Lory Meagher Cup this Saturday in Pairc na hEireann at 11:45 against Louth. Redders has been in great form for to date and hit 4 points form play in the previous round against Leitrim lining out at number 11.

Two second-half goals from man of the match Liam Reale finally ended the stubborn resistance of a brave Leitrim team for the Exiles recently relegated from Division 3A.

And while the winning margin may have flattered Warwickshire it was nevertheless the best possible start for John Bergin’s team who face Louth in Pairc na hEireann, Birmingham this Saturday.

That game will be part of an attractive ‘doubleheader’ with Lancashire hosting Leitrim in the second game.

Relegated from the Nicky Rackard Cup last season Louth began their campaign with a home victory over Sligo and will be a step-up in class for Warwickshire.

So the Exiles will have to improve if they are to overcome the Wee County who were the losing Nicky Rackard Cup finalists twice in the early years of the competition.

But Warwickshire were always in control against Leitrim at a sunny but cold Ballinamore despite being held at 0-3 apiece after fourteen minutes. Points from a Pauric Crehan free, Liam Reale and Ogie Long opened up a three-point lead for the visitors playing into the road end after eight minutes.

But Leitrim were back on level terms through two Clement Cunniffe frees and a rare score from play by centre forward John Ryan.

However Leitrim’s momentum was short-lived when another Pauric Crehan free followed by a fine score from John Reddan had the Exiles back on track after seventeen minutes.

But a goal from Conor Robins a minute really rattled the Westerners and with Pauric Crehan converting a ’65 followed by braces of points from Shane Morrissey and John Reddan to put Warwickshire nine points clear after twenty six minutes Leitrim were now in serious trouble.

But with the ever reliable Clement Cunniffe playing very steadily at centre back Leitrim were always capable of a response and he took full advantage of poor defensive discipline by the visitors to hit three unanswered points in four minutes.

However Warwickshire finished the first half on top by outscoring their hosts 0- 3 to 0-2 with scores from Morrissey, a Pauric Crehan free and Jack Quinn in reply to another Cunniffe free and only their second score from play from Zac Moradi to leave the halftime score: Warwickshire 1-13 Leitrim 0-8.

Trailing by eight points Leitrim needed a fast start to the second half and were off the mark through Clement Cunniffee within a minute.

But after another pointed free cut the Leitrim deficit to six points Warwickshire hit three unanswered points from Shane Morrissey (2) and Conor Robbins to ten points clear by the end of the third quarter. And although Leitrim battled all the way they were rattled by another Warwickshire goal from Liam Reale after 56 minutes.

A brace of Clement Cunniffe frees followed by goal from Gavin O’Hagan on the hour appeared to set up an finish.

However Warwickshire refused to panic and inspired by late scores from Liam Reale (1-1) and points from Pauric Crehan and Shane Morrissey the Exiles finished comfortably despite two late Clement Cunniffe pointed frees.