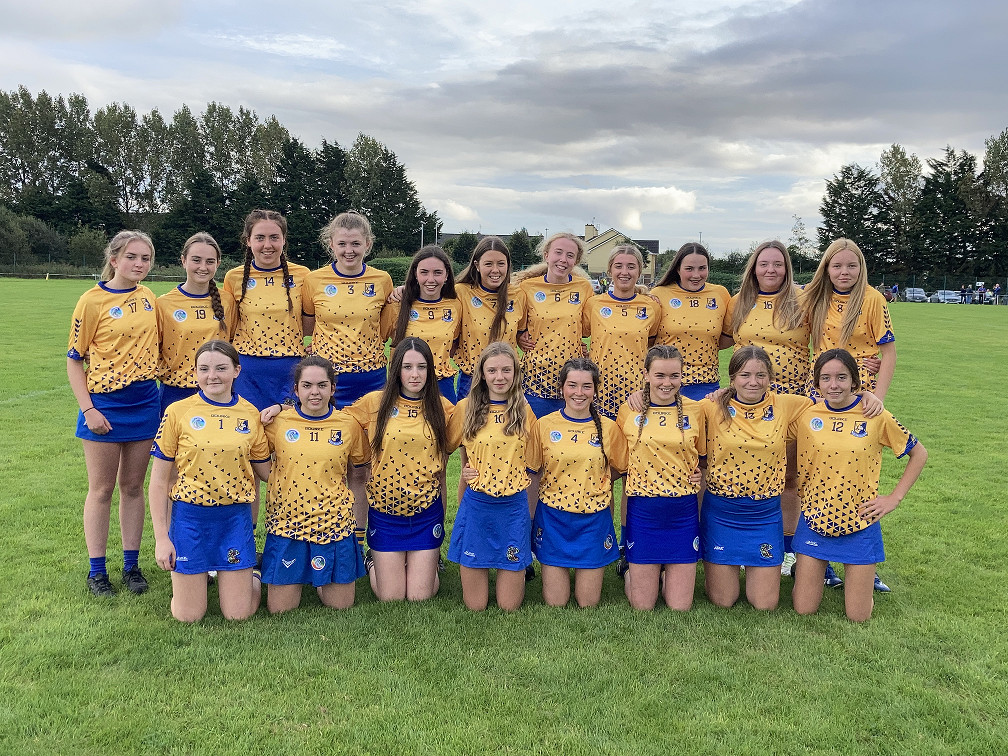 On September 15th 2021 the Bridge Camogies were crowned County Champions. Grace Stafford who starred on the team is a student at Coláíste Muire in Ennis wrote a beautiful piece on the final as part of a creative writing assignment for her teacher Ms. O'Connell (who starred on the GAA fields of Cork herself back in the '70's) . Grace covers the emotions, preparation, mindset and that feeling of playing and winning with your friends in her assignment which must have got top marks from Ms. O'Connell who has promised Grace and the rest of her English class that there will be no English homework until 2022 if this article gets more than 500 views! Enjoy the read.

There are fifteen minutes left now girls. I want you to give it your everything and die in your boots tonight. That’s what my coach said to the team moments before we won our county final, something I'll remember for the rest of my life.The days building up to the match were key to our preparation. Dermot Stanley ( one of our managers) had the whole week planned out for us. Saturday morning he arranged a challenge match against the junior camogie team, to prepare us for how strong Clarecastle were going to be. On Sunday we went to the Killaloe Aqua park for some team bonding.

We had no chance of winning if we didn't play as a team. Monday night we just had a light training session and then on Tuesday Davey Fitz presented us with windsheeters and he gave us a motivational speech. Then Wednesday was the match.

On the morning of the final I was so nervous. It was a Wednesday, a school day, so at least I had school to occupy my mind during the day. However it felt as if the school day was a hundred years long. When school was finally over I quickly went home and ate my dinner. I then went outside with my brother to puck the ball. When my parents said it was time to go that’s when the real nerves kicked in. The match was on in Father McNamara Park, although had we pushed for it to be on in Cusack Park but unfortunately that didn't happen.

We got to the pitch and suddenly I wasn't nervous anymore. Clarecastle already had their jerseys on when we got there but they seemed lacking in focus, just standing around talking. It felt like they were trying to intimidate us but this didn't faze us. When the entire team got there we went over to the dugout to put on our jerseys together. We were expecting to get the same old worn jerseys we usually do but we were shocked to see we had got brand new jerseys just for the occasion. The whole team were ecstatic but we couldn't get too excited as we knew we had a job to do.

As we were warming up the referee Jim Hickey called over the captains for the coin toss. Helena Ryan went over for our team and won the toss. She was lucky to be playing that night as she got a concussion just over a week previous, playing a minor match against Newmarket. The match was starting in around five minutes and Clarecastle had only started to warm up. We were, I felt, already on the front foot.Once the match started I just knew it was going to be tough.

There was a huge crowd at the match as everyone heard what our first encounter was like. Everyone was waiting for a fight to break out but we kept our heads cool as we couldn't afford for that to happen. Nothing too exciting happened in the first quarter and when when the ref blew the whistle for the first water break Clarecastle were two points up. Clarecastle 0:4 , Sixmilebridge 0:2. We hadn't started with 100 percent effort and it showed. Our management weren't too happy as they expected more from us, so did we.When the second quarter started Clarecastle didn't know what hit them. They were two points ahead so they let their guard down. That was a big mistake. Before we knew it was half time and we were feeling great. The score was now Clarecastle 0:4 , Sixmilebridge 1:7.

They hadn't scored since the first quarter. But we knew this lead meant nothing. There was still thirty minutes to go. Thirty minutes of focus and determination.We went into the third quarter knowing we had to give it our all again. Both teams got a couple of points but nothing significant. We were still in the lead but not by much. I knew the last fifteen minutes were going to be a dog fight.Both teams wanted to win so badly. But at the end of the only one team was going home with the cup.At the very start of the last quarter I was lucky enough to score a goal but not much later Clarecastle this was counteracted that with a goal for Lauren Cusack, a classmate of mine in school.

We then scored two more goals in quick succession by Charlotte Chaplin and Haley Keogh. Yet again Clarecastle scored a goal. After this score they were only down by three points. The next few minutes would be critical.We got another couple of points by the time Clarecastle got their last goal. But that goal didn't matter. The whistle was blown and the game was over. All of our hard work had paid off.It was such an emotional experience for the team.

This was the first final we had won in three years, a day I will definitely remember as the happiest day of my life so far. As we were presented with the cup and got a team photo with the coaches, I remembered a moment from earlier that year. At our very first U16 training the coaches had said “ we won’t take any team photos with us until we had a county final won”. I guess their wish came true!