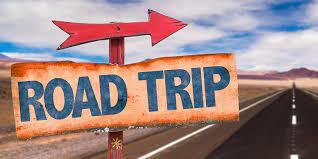 An early start for the U13 boys last Saturday as they met at O'Garney Park at 7am for a much anticipated trip to Dublin. The itinerary included A and Academy games versus Ballyboden St Endas and a tour of Croke Park. We were on the road at 7:15am, stocked up with a gallon of hand-sanitizer and enough spare face-masks to supply a small hospital. Holla cemented his reputation as the wily veteran of these occasions by whipping out a set of noise-cancelling headphones as we departed the 'Bridge, much to the envy of all the other coaches. The rocky road to Dublin is long a thing of the past and we cruised up the motorway in good time, making it to the leafy suburbs of south county Dublin at around 9:30 am.

It was a beautiful blue sky morning in the capital as the lads warmed-up for their games. With former Dublin manager Jim Gavin patrolling the sideline for Ballyboden, the pressure was on Adrian and Doc as they pitted their tactical nous (forged over many years on the unforgiving Go-Games blitz circuit and more recently in the white heat intensity of the Clare U13 championship) against the 5-in-a-row legends coaching acumen. The game was a great battle and ended level on a score of Ballyboden 2-10, Sixmilebridge 1-13 (Conor Fitzpatrick, Zak Phelan, Rory Chaplin and Stephen Gavin scoring for Sixmilebridge). The Academy game was a more one-sided affair with the stronger Ballyboden lads dominating in key positions and they ran out comfortable winners in the end. Scorers for the 'Bridge were Charlie Keane, Conor Keogh and Cillian O'Connor.

After the games we headed back to the bus but before pulling out of Ballyboden, Jim came on board to chat to us. He gave a great talk - welcoming us to Dublin and telling us about his strong Clare connections and his links to Sixmilebridge. He went on to give some great advice and observations from his time in management - he explained his belief that the best reward you can get in sport is not winning but by playing to the best of your ability. He told the lads that he didn't buy into the idea of natural talent and that the main characteristics he looked for in his players was good attitude and a willingness to work hard. He also emphasised that those attributes apply to other walks of life too, such as school - the results you achieve reflect the effort that you make. It was an absolute privilege for all on board to hear Jim speak and we really appreciate that he took the time to chat to us.

Massive thanks to Ballyboden St Endas for hosting us and the great welcome we received. We are already looking forward to welcoming them to Sixmilebridge next year for an U14 rematch. 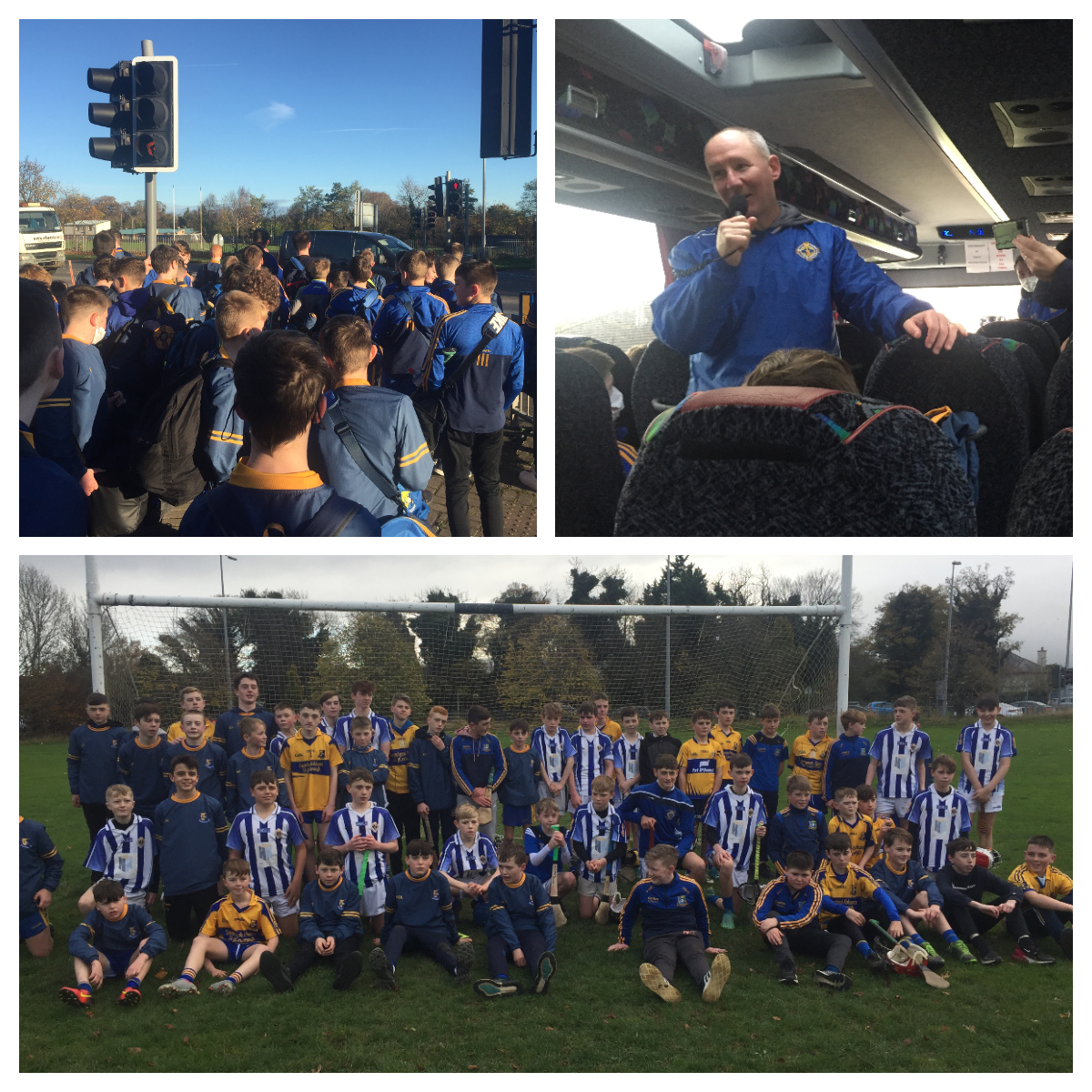 We then headed to Croke Park via the city centre where we passed some of the fair city’s famous historical and cultural sites including St Stephens Green, Leinster House and Copper Face Jacks (with some lads pinning the geo-coordinates into their phones for future reference and a few coaches reminiscing about their glory days spent in that fine establishment). Croke Park loomed into view soon after we crossed the Liffey and it wasn't long before we were pulling up and ready to begin our tour.

The tour started under the Cusack Stand and, after a brief introduction about the stadium, we got to enter the pitch area and walk along the sideline. Everyone was absolutely blown away by the pristine surface of the pitch - we all agreed it was hard to believe it was natural grass. Our guide explained that there a four full-time groundpeople looking after it and that they mow it (by hand) twice a day during the summer. Our visit coincided with the 101st anniversary of Bloody Sunday and our guide gave the lads a brief history of the events of that day. We then got a tour of the dressing rooms before viewing a short film about match day in Croke Park. When one segment of the film showed Jim Gavin holding the Sam Maguire cup, we heard one of the players exclaim 'hey, thats yer man that was talking to us on the bus!' :) :) 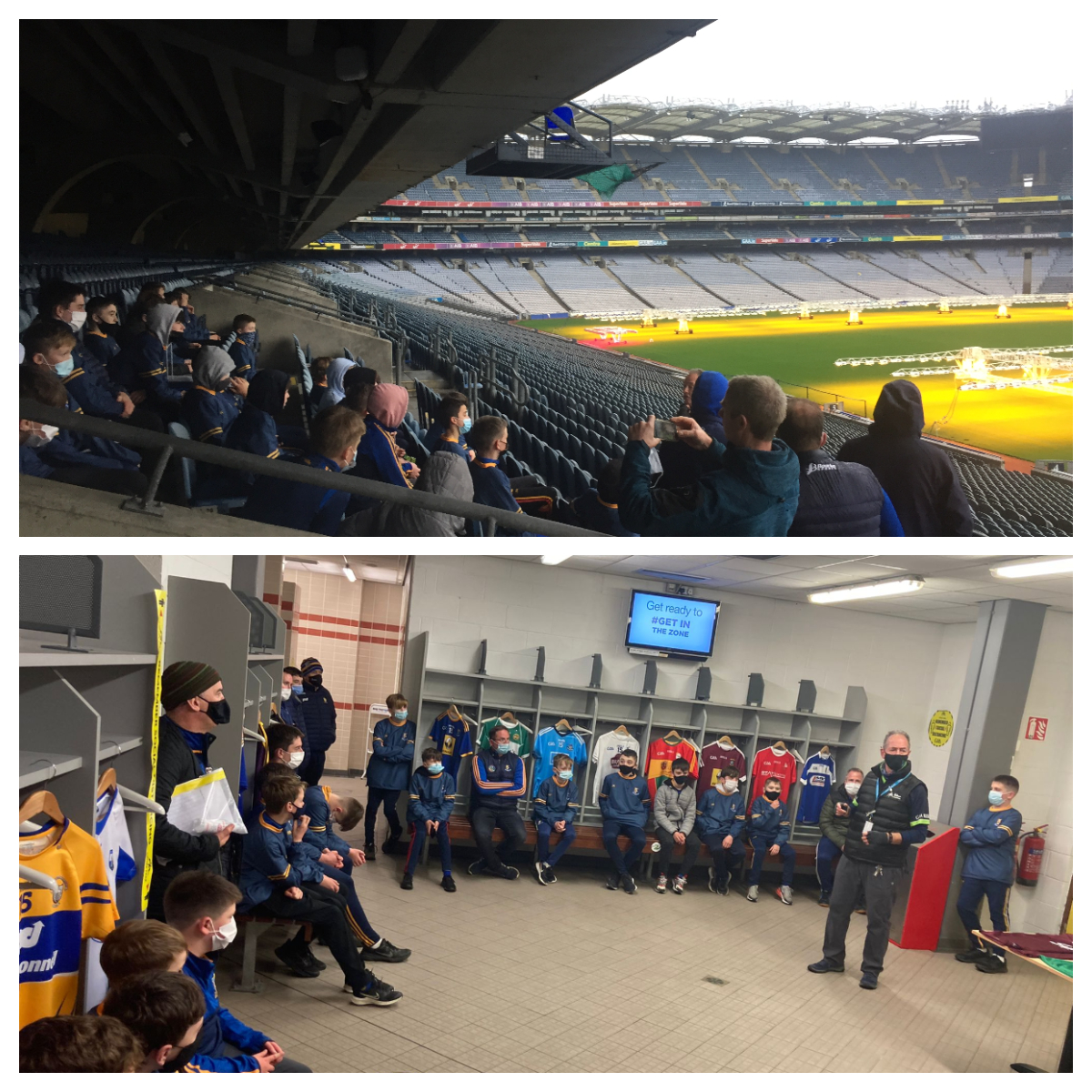 It was then off for a browse in the GAA Museum and Interactive Games Zone where the players tested their speed and agility on the various sets of equipment. Lads were beginning to get tired at this stage but funnily enough they got a new lease of life when they realised that there was an u14 camogie team from Antrim also on site. After a browse in the Croke Park gift shop and some team photos with the statue of another great Clare man, Michael Cusack, we boarded the bus for the trip home. We stopped off along the way at the new Portlaois Plaza (Junction 17) for a well-earned Supermacs feast. 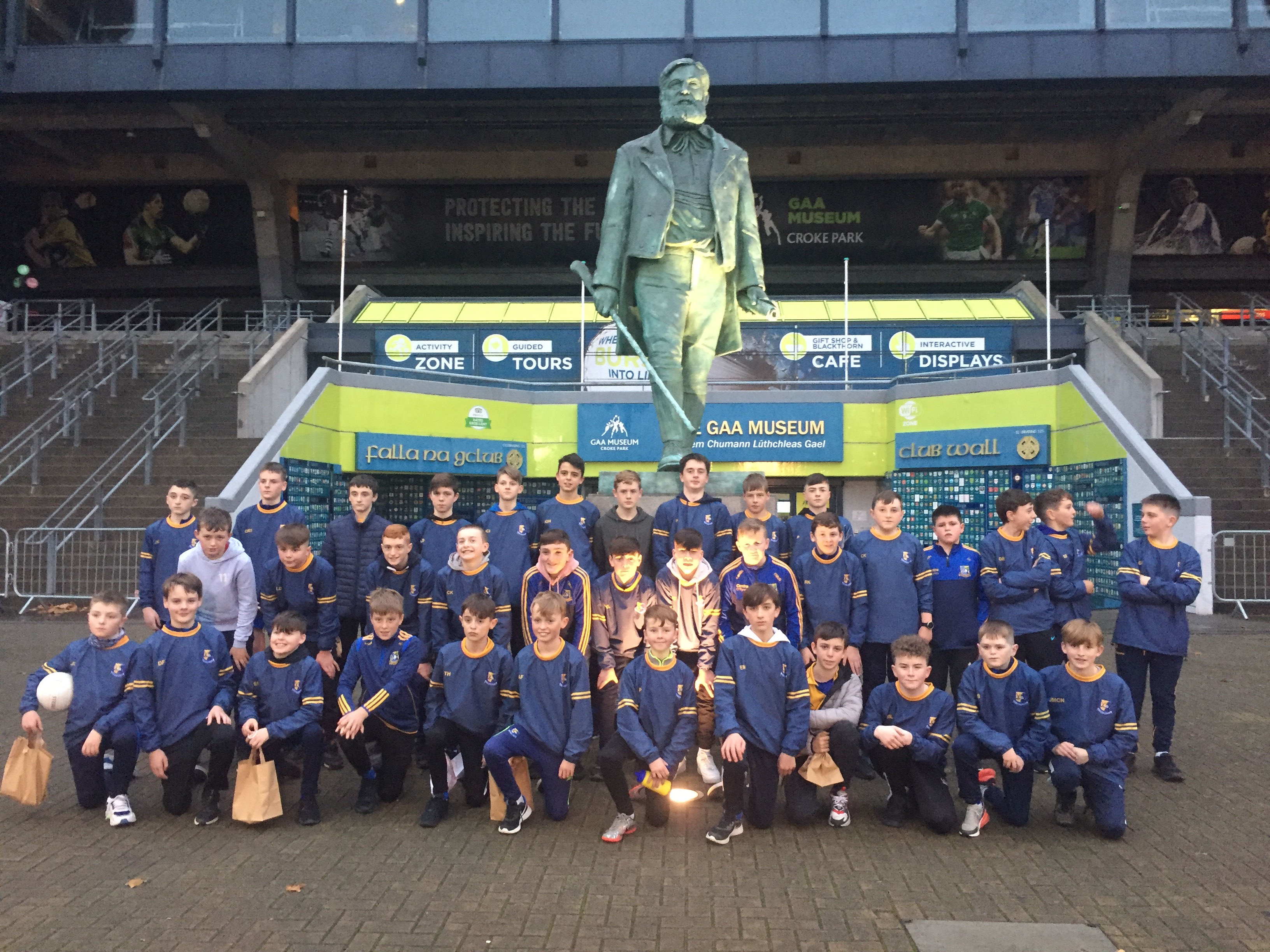 The bus microphone was unleashed for the final leg home with the squad entertaining us with an eclectic selection of timeless classics. Highlights (or lowlights perhaps) included a medley of hits from our very own '2 Johnnies' (Conor Keogh and Cathal Ryan), Rory Chaplin and Donal O'Leary giving us a rousing rendition of the traditional favourite 'All the Single Ladies' and Eoin Gavin treating us to his interpretation of the Beyonce power ballad 'The Famous Faha Sports'. By the time Conor Fitzpatrick, Dylan Keogh and Jack Lynch broke out the Christmas hits, our long suffering bus driver was probably thinking there was easier ways to make a living! 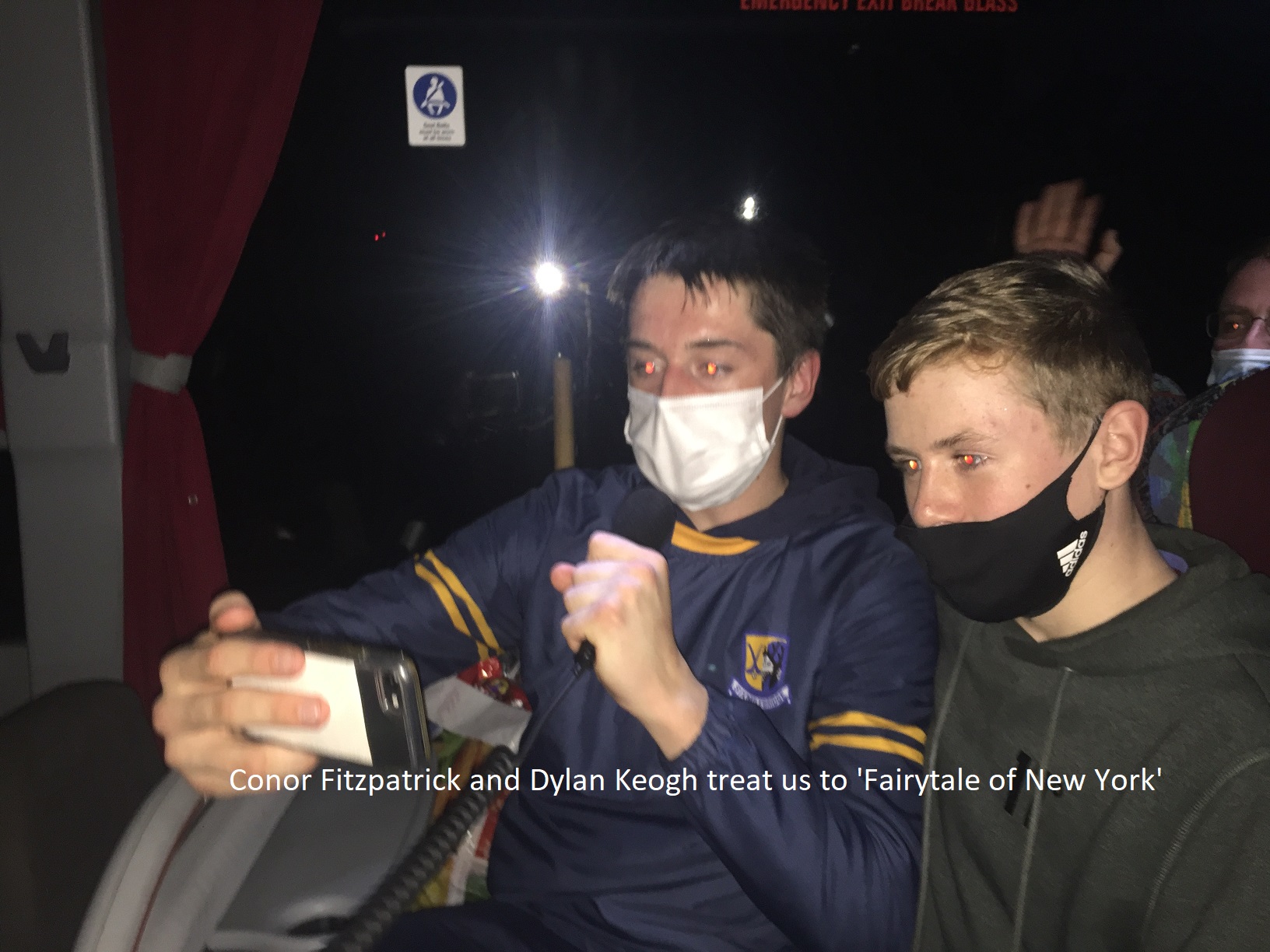 We rolled back into the 'Bridge at around 8:30pm - the coaches a bit shook from the experience but the young lads ready for more road. It was a fantastic day from start to finish and a brilliant way to end an epic U13 hurling year.

Many thanks to everyone whose work behind the scenes in the Minor Club allow trips like these to happen and special thanks to the players themselves who complied with the covid restrictions (masks\sanitizer) throughout the day.