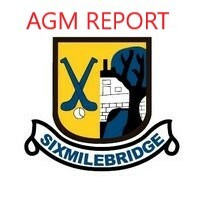 There was a healthy turnout of 40 patrons for the Sixmilebridge Gaa Club AGM in the Hall at O' Garney Park, Sunday evening last.

Syl O’ Connor was elected as Chairman for his second year. Syl acknowledged the huge work being done in lots of different areas of the club, across Coaching Teams, Field Teams and from within the Executive.

Adrian Hogans Secretary's report outlined many of the positive events that occurred in the club during the year such as the Parish League, the succesful Junior C and B teams and the reaching of finals at U19 and semi finals at Intermediate and Senior. There were 517 members in 2022 which is very positive. There were over 70 adult competitive games, not including challenge games in 2022 which is a fantastic offering for all adult players across the various adult grades and U19 and U21 competitions. The Arena is reaching its final stages and is due for opening very soon.

The following were elected on the night.

Committee and Management teams will be discussed at next Committee meeting.