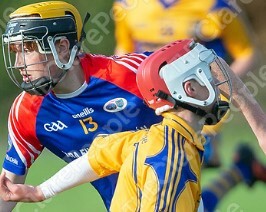 Our U21A Hurlers bowed out of the championship on Sunday in Corofin. Having lost out to Barefield in Rd. 1, the 'Bridge were drawn to play defending champions Corofin Ruan in the Quarter final, with Corofin Ruan having home advantage.

Conditions were very wet underfoot and even though weather was mild initially, by the middle of the second half, conditions had descended into extreme weather with no less than thunder, hailstones, gusts and heavy driving rain. Thankfully there was a stand for the spectators.

It would be fair to say that Corofin Ruan were the favourites for the game, having a number of Clare Senior and U20 players on their team sheet. The 'Bridge lost the coin toss and played against the wind in the 1st Half.

Shane Punch opened the scoring with a well taken point for Corofin Ruan, however the 'Bridge took the lead soon after with 2 well taken frees from Luke O' Halloran. Corofin Ruan responded with 4 points on the trot, 3 from frees converted by Punch and a point from play from Diarmuid Cahill. Further points were exchanged between O' Halloran and Punch before the sides were equal again following a fine point from David Kennedy. The half finished with Corofin Ruan ahead by 1 point at 0-9 to 0-8 despite the significant wind advantage.

The ' Bridge entered the dressing room at half time content with their work rate in the first half which, having fought hard for everything and matched their opponents all over the field. The advantage of the wind was to come for the 'Bridge in the second half, however the weather completely changed and the wind swung the other way. The 'Bridge stayed in contention for a large parts of the second half and with 10 minutes to go, only 2 points seperated the teams, Corofin Ruan ahead 0-14 to 0-12. But late goals for Corofin Ruan killed off any hopes of a victory. Luke O' Halloran hit a brace of points from distance from play and Dara Casey finished off a short free from O' Halloran. Goalkeeper Cian Fawl struck a long distance free from his own half, over the bar also.

Whilst the result on paper appeared to be a decisive result for Corofin Ruan, those that were in attendance would have seen the 'Bridge really put it up to this very good Corofin Ruan team for a large part of the game. Nevertheless this Corrofin Ruan team have some fine players and were champions at Minor 3 years ago and indeed are the defending 2021 U21 champions also and will go on to be major contenders for this championship.

Good for the 'Bridge on the day were Dylan Downes who tackled hard all day at wing back and Luke O' Halloran who from play and frees was the 'Bridge's top scorer. Leon Kelly and Adam Murray also played well, but really the whole team put in a fighting performance and with only 2 players over age for next year, this team will look to build on this years championship performances going forward.

The U21C competition is still ongoing and the 'Bridge second team will be in action in the semi final in a couple of weeks. Also the Junior B All Ireland Quarter Final takes place in Killeedy in Limerick on Sunday next at 12pm against St. Brendans of Kerry.